How to Not Be Naked and Afraid in Bear Markets

by Florin EL Luppo
in Investing
0

Why did you invest in stocks?

You had other alternatives…

Your principal and interest rate are guaranteed by the U.S. government.

You’d have no surprises or worries about the ups and downs of interest rates.

There’d be zero chance of losing your money.

Or, you could’ve invested in precious metals, such as gold or silver.

Instead of owning a piece of paper, you’d have something physical.

You could take it out of your safe to touch and admire.

The returns on precious metals aren’t the best, but at least you could cuddle with your bullion.

But the reason you bought stocks is simple…

You wanted the highest returns.

U.S. government notes are liquid, but their returns are pretty low.

And precious metals don’t produce anything and cost you money to store.

But stocks are a no-brainer. 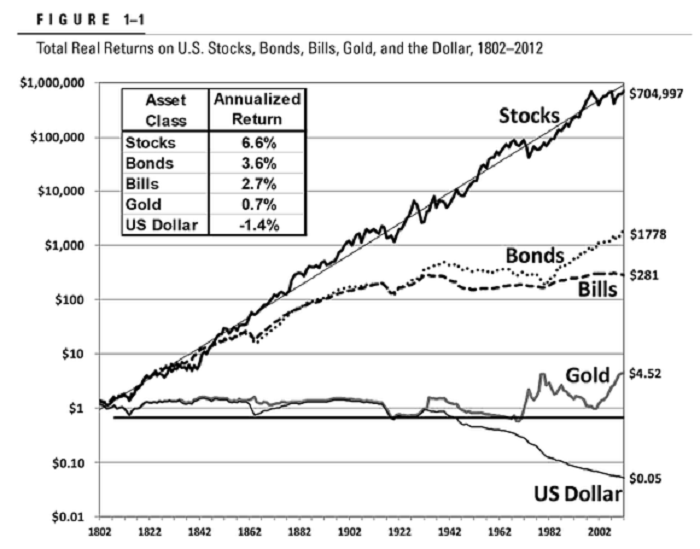 Source: Stocks for the Long Run by Jeremy Siegel

U.S. stocks have outperformed Treasury bills by almost 3X and gold by more than 6X.

Unless you live as long as Methuselah — who had the longest lifespan in the Bible (969 years) — you don’t have a two-century time horizon.

I get that, but I want to make a point…

Being an owner of a piece of a business is hands down the way to grow your money.

Nothing even comes close.

But stock prices don’t have steady increases each month.

Instead, they bounce all over the place.

And that’s a big shame for most investors.

They’d be a lot richer if they knew how to turn volatility into an advantage.

So, in tomorrow’s Real Talk, I’m going to share with you how to flip the script.

It’ll be like giving you the keys to the kingdom.

And it’s a lot easier than you would think…

Updated on July 5th, 2022 by Bob CiuraSpreadsheet data updated daily The Dividend Kings are the best-of-the-best in dividend longevity. What is a Dividend King? A stock with...

In late 2018, I gave a talk at the Fintech on the Block conference in San Francisco. The cryptocurrency market was in the middle of a “crypto winter,”...

Micron’s Outlook Misses the Mark, but the Stock Is a Buy, Says Raymond James

Everyone is reeling from the global economic downturn, and it looks like Micron (MU) is feeling the pinch too. The memory giant delivered a solid FQ3 report but...

Don’t Forget To Do Your Retirement Homework

U.S. rolls out COVID vaccine for tots By Reuters