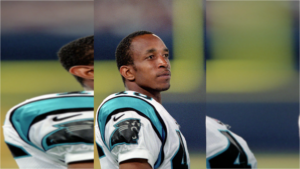 The news was announced by Anderson’s alma mater, Jackson State University. He played the cornerback at  the HBCU from 1996 to1999 and was inducted into the school’s Hall of Fame. No cause of death was disclosed.

“Today is a sad day for the JSU family,” Jackson State University vice president/director of athletics Ashley Robinson said in a written statement. “Rashard was one of the best players in the history of our football program and an outstanding person. He attended our spring football game in April and was excited about the program returning to championship status. Rashard will always be remembered by Jackson State University, and our thoughts and prayers are with his family at this time.”

Anderson had a remarkable collegiate career at Jackson State University that did not translate into success in the NFL. The Carolina Panthers selected him 23rd overall in the 2000 draft. Sadly, his professional career only lasted just two seasons. He was suspended in 2002 for violating the NFL’s substance abuse policy. He was reinstated but the Panthers released him but no team picked him up, thus ending his pro career.

When Anderson played at JSU, he led the Tigers to the 1996 Southwestern Athletic Conference (SWAC) Championship game and the 1999 SWAC Eastern Division Title.

Anderson was one of Jackson State University’s 100 NFL draft picks, a list that includes Walter Payton, Jackie Slater, Lem Barney, and Robert “Dr. Doom” Brazile—all of whom have made the Pro Football Hall of Fame.

He did get a chance to play pro football, albeit for a short stint, with the Canadian Football League (CFL).The Mississippi Clarion Ledger reported that Anderson worked at several jobs after his football career ended, including as a substitute teacher and assistant high school football coach.

How do you know if AD is too high?

The housing market recession could be bottoming out. What does it mean for home prices?