Interview with Monika Rogers, Co-Founder and CEO of Digsite, and Vivek Bhaskaran, CEO of QuestionPro 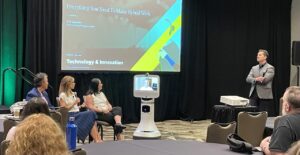 Two-thirds of companies have adopted some form of anywhere-work. A majority have implemented hybrid work, a version of anywhere-work in which employees come into the office at least weekly. But as we detail in our newest report in our anywhere-work series, Master The Messy Middle Of Hybrid, the road to hybrid success is riddled with speed bumps. Too often, organizations end up with doubtful leaders; dissatisfied middle managers; frustrated employees; and an unfulfilled need for new processes, technologies, and culture.

It’s all a work in progress.

Anywhere-work will continue to test leaders and employees for years to come. Mastering hybrid will require organizational innovation. And achieving that innovation requires experimentation: trying out new practices that employ new technologies and challenge cultural norms.

We decided to take our own advice and experiment. I’ve been leading our research on anywhere-work, but I’ve been unable to travel due to high risk and long COVID complications. Yet we wanted to include my research in our Technology & Innovation Forum in Austin. So how could we incorporate me into the program in a compelling (but hybrid) fashion? 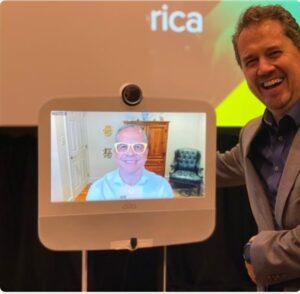 The goal of the session was for me to participate in a relatively natural way using technology. The telepresence robot: 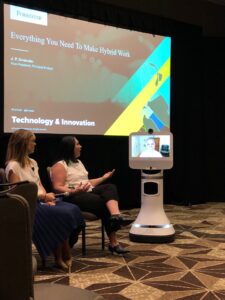 The telepresence robot sat on the panel just like the human participants.

Telepresence robots have been around for few years; I saw them at big technology conferences pre-COVID. Some early vendors have consolidated: GoBe bought Beam, an early market player. But they’ve never become commonplace. The Ava Robotics solution performed well technically but its success will require new norms:

Telepresence Is Just One Of Many Experiments You Should Try

Telepresence robotics ably fulfilled a need for our event and so we tried it. This technology may or may not fit a new you’re experimenting to fill. The same is true for other technologies. In The Forrester Tech Tide™: Enterprise Collaboration Technologies, Q3 2022, we identify five technologies to experiment with (like the metaverse) and seven that you should invest in today (like in-room whiteboarding).

J. P. Gownder is a vice president and principal analyst on Forrester’s Future of Work team.

Have you considered buying a revenue operations and intelligence (RO&I) or sales engagement platform? If so, you’ve likely seen vendors touting the benefits of their native Salesforce capabilities....

Interview with Monika Rogers, Co-Founder and CEO of Digsite, and Vivek Bhaskaran, CEO of QuestionPro

Recently we wrote about the implication of the QuestionPro and Digsite M&A deal, calling it a key signal in the next phase of the “Platformification of QualiQuant“. In...

It’s Back To The Basics

A few weeks ago, I had the opportunity to attend the Tanium Converge conference in Austin, Texas. There’s been a lot of buzz around Tanium in the industry...

Sustainability and inflation in household cleaning

These Banks Have Eliminated or Reduced Overdraft Fees

How Can I Check My Credit Score?