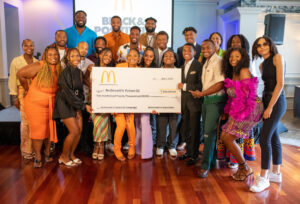 The fast food enterprise recently teamed up with Palmer to award $10,000 to each of its “Future 22” leaders, totaling $220,000 to fund their community-driven initiatives through its Black and Positively Golden movement, according to a press release. The surprise took place during the ESSENCE Festival of Culture, and the 28-year-old Big Boss Entertainment head had the pleasure of presenting the grants as the “Future 22” spokesperson.

“It’s an honor to join McDonald’s to recognize and celebrate these awesome leaders, while also supporting their work and mission,” Palmer said, per the press release. “They are creating bright futures for themselves and the next generation — and, really, all of us — and the excitement on their faces during the McDonald’s surprise gave me joy.”

As BLACK ENTERPRISE previously reported, McDonalds launched its “Future 22” campaign during Black History Month to celebrate the works of 22 visionaries and Black leaders “whose passion and talent are creating meaningful change in communities across the country.” Throughout February, their stories have been told on Instagram at @wearegolden and McDonald’s YouTube channel, as well as TV and radio spots voiced over by Palmer, and more.

“This year’s Essence Fest theme was Black Joy, and we couldn’t wait to celebrate all 22 leaders and bring them to New Orleans, in honor of their accomplishments,” said McDonald’s Senior Director of Cultural Engagement, Elizabeth Campbell.

“We certainly could’ve surprised them virtually but making them a part of our Essence Fest moment meant unlocking the additional community of supporters who are McDonald’s owner/operators and the Essence Fest family, to further celebrate them and demonstrate our belief in their work. It was more special than imagined, representing our commitment to feeding and fostering the communities we serve.”

Palmer is an epitome of resilience and triumph. With 20 years in the entertainment business, she has championed girls of all cultures across the country in the areas of music and the arts, as well as Black woman business owners.

On July 2, the life-changing philanthropist expressed her excitement for the “Future 22” awardees out loud via Instagram.

“The JOY on those faces though!!!,” Palmer captioned a short clip. It has been my absolute honor to present this year’s @mcdonalds Future 22. Sharing how they are pushing culture forward while being unapologetically golden has been a blast. That’s why on behalf of McDonald’s I am at @essencefest to present the Future 22 with $10k each to continue their Black excellence efforts! ✊ #blackandpositivelygolden.”