Liz Truss, a leading candidate in the race to replace Boris Johnson as UK prime minister, has issued tax cut pledges equivalent to over £30bn a year, prompting accusations of fiscal irresponsibility.

Speaking during an online hustings on Friday afternoon involving the five contenders to become Conservative party leader, the foreign secretary said she would cancel a planned 6p rise in corporation tax worth £17bn a year designed to plug the post-Covid black hole in Britain’s finances.

Truss added she would abolish a £12bn increase in national insurance contributions designed to fund health and social care services, describing it as a “mistake”. “I think it’s even more of a mistake now where we are facing such strong economic headwinds,” she said.

She also promised to lift the green energy levy imposed on consumers’ bills for two years at a cost of £4.2bn, cutting £153 a year from each bill. “We immediately need to start putting money back into people’s pockets,” Truss said.

The announcements at the event run by the ConservativeHome website mark an attempt by Truss, currently in third place in terms of MP support, to tack to the right to pick up more votes from that wing of her party. 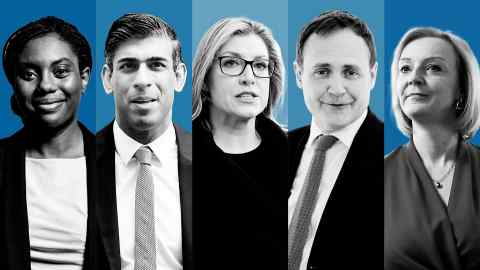 Tory MPs will continue voting every day from Monday with the person receiving the fewest votes eliminated until the shortlist is whittled down to two candidates. Each candidate needs the backing of 120 colleagues to be sure of reaching the final shortlist, which will be presented to party members to choose from over the summer.

Truss’s comments prompted criticism from rival leadership camps, with one senior party figure working on another campaign saying Britain needed a responsible and serious government. “Making big spending pledges without saying how you’ll fund them is neither of those things,” the person said.

One organiser from another campaign said: “Our policies have to be costed and realistic, but I’m not sure others are playing by that rule.”

Kemi Badenoch, another contender, said she would not promise “big tax cuts” because “it’s important to be realistic about the fiscal situation”.

However, one ally of Truss said she would announce a spending review immediately on entering Downing Street and would be able to find some fiscal firepower by paying back £311bn of Covid debts over a longer period — treating them akin to second world war loans.

Another member of her team said the exchequer had more “headroom” than widely thought because tax receipts would come in higher than expected this year.

Clarke said this week he would like tax cuts in the long term but argued that in the current economic climate the pledges were “populist nonsense”.

Rishi Sunak, the former chancellor and another frontrunner in the leadership race, said he wanted to deliver tax cuts but only when the time was right. Sunak cited former Tory prime minister Margaret Thatcher, saying she had cut taxes in the early 1980s but only after tackling inflation.

“The most pressing economic challenge we face is inflation. Inflation is the enemy that makes everybody poorer,” he said. “I will deliver tax cuts, but will do so responsibly after we’ve got a grip of inflation.”

Sunak said he had already announced a cut in income tax before the end of the parliament.

Penny Mordaunt, who is also performing strongly in the race, said that as prime minister she would modernise Whitehall and focus on innovation and investment, saying the government’s ambitions should not be “limited by what is in the Treasury’s coffers”.

The five candidates, who also include Tom Tugendhat, will participate in their first TV debate at 7.30pm on Friday on Channel 4. ITV will host a second event on Sunday, and Sky News another on Monday.

Truss received a boost on Thursday night when leading Eurosceptics, including attorney-general Suella Braverman, who was knocked out of the race on Thursday, endorsed her campaign.

Truss won 64 votes in the second round, trailing Mordaunt on 83 and Sunak on 101. She will hope to pick up many of Braverman’s 27 votes in the next round of voting.

December 2022 Movies: Jingle Bells Month - December - is about to begin! With the beginning of the month of Christmas, the cinema has a lot to offer...

* This is in partnership with BQ Prime BrandStudioIndia’s digital payments ecosystem has been growing at a rapid pace over the past few years, supported by widespread adoption of...

The Indian economy slowed down in the September quarter (Q2 FY23) as the GDP growth rate dropped to 6.3 per cent from 8.4 per cent in the year-ago...