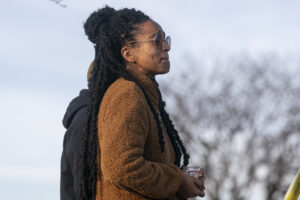 An employee of Walmart who survived the mass shooting at a Chesapeake Walmart last week has filed a lawsuit against the giant retailer.

According to NPR, Walmart employee Donya Prioleau filed a $50 million lawsuit on Tuesday in Chesapeake Circuit Court in Virginia. The paperwork states that Walmart continued to employ 31-year-old Andre Bing, who shot several employees before killing himself. The lawsuit says Bing was a store supervisor “who had known propensities for violence, threats and strange behavior.”

Prioleau claims that she is experiencing PTSD (post-traumatic stress disorder), including physical and emotional distress, after seeing the incident unfold when the mass shooting transpired on Nov. 22.

The lawsuit states, “Bullets whizzed by Plaintiff Donya Prioleau’s face and left side, barely missing her. She witnessed several of her coworkers being brutally murdered on either side of her.”

Bing fatally shot six Walmart employees in a breakroom and injured several others before he took his own life.

She also stated that she previously complained of Bing’s conduct toward her when she submitted a formal complaint on a Walmart Global Ethics Statement Form. She indicated that Bing had “bizarrely and inappropriately commented on Ms. Prioleau’s age.”

“Despite Mr. Bing’s long-standing pattern of disturbing and threatening behavior, Walmart knew or should have known about Mr. Bing’s disturbing and threatening behavior, but failed to terminate Mr. Bing, restrict his access to common areas, conduct a thorough background investigation, or subject him to a mental health examination,” the lawsuit states.

Bing reportedly purchased the firearm the day he conducted the mass shooting. Chesapeake Police officers got to the scene and discovered Bing and two victims dead inside the break room. Another victim was found near the front of the store, and three other victims died later at the hospital.

December 2022 Movies: Freddy, Blurr, Avatar: The Way of Water and other films releases this month - LIST

Shanghai hit by COVID protests as anger spreads across China