The Last Time Inflation Was This High

The last time inflation was this high was November of 1981.

I was 3 months old at the time.

There are some similarities between now and then.

There was an energy crisis back then just like there is today. The Fed was tightening monetary policy to fight inflation in the early-1980s as well. And people were increasingly unhappy about the economic state of affairs.

But there are many differences between now and the early-1980s/late-1970s.

Interest rates have risen from the floor but still remain well below the inflation rate: 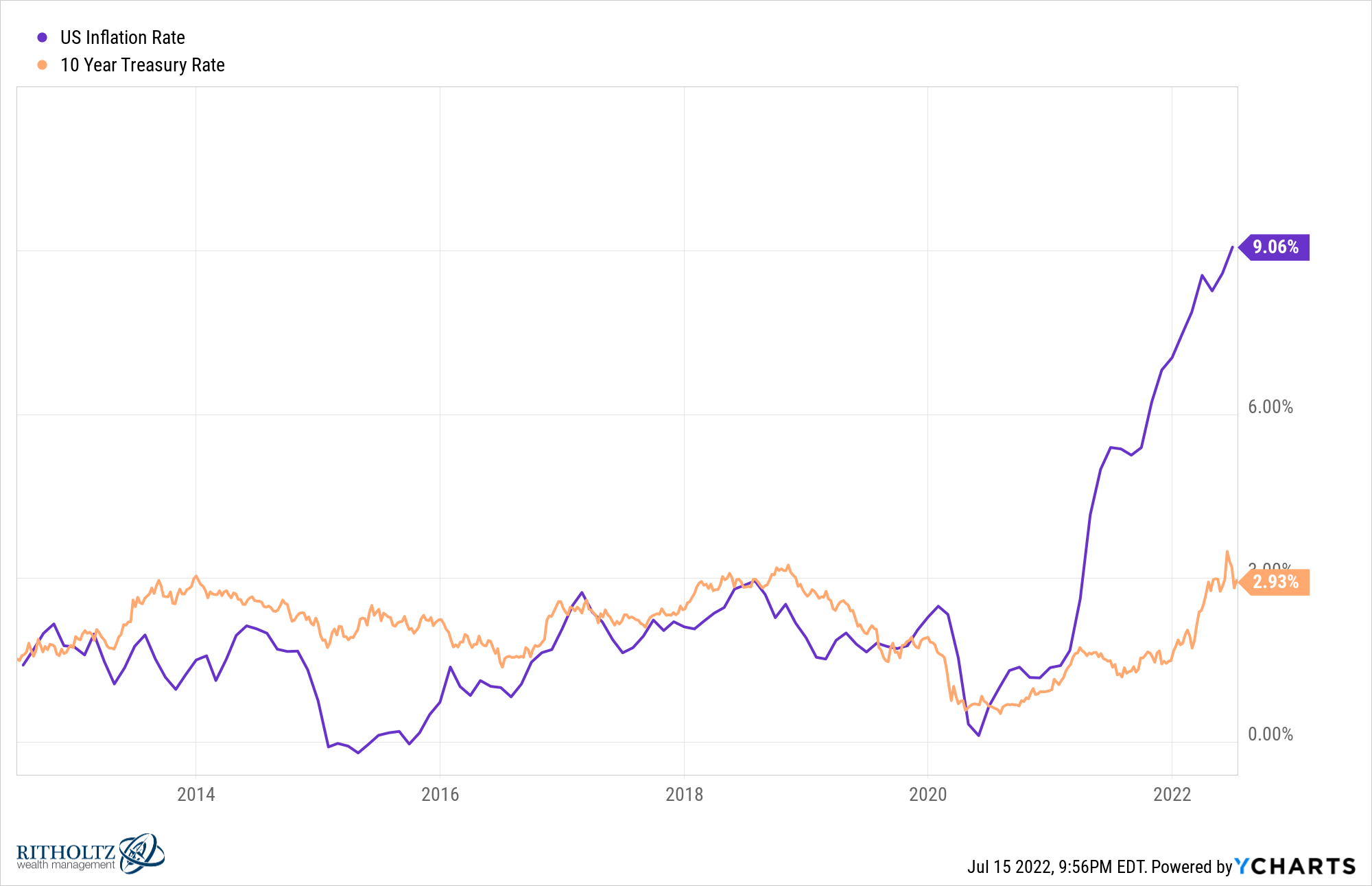 Back then interest rates were far above the rate of inflation: 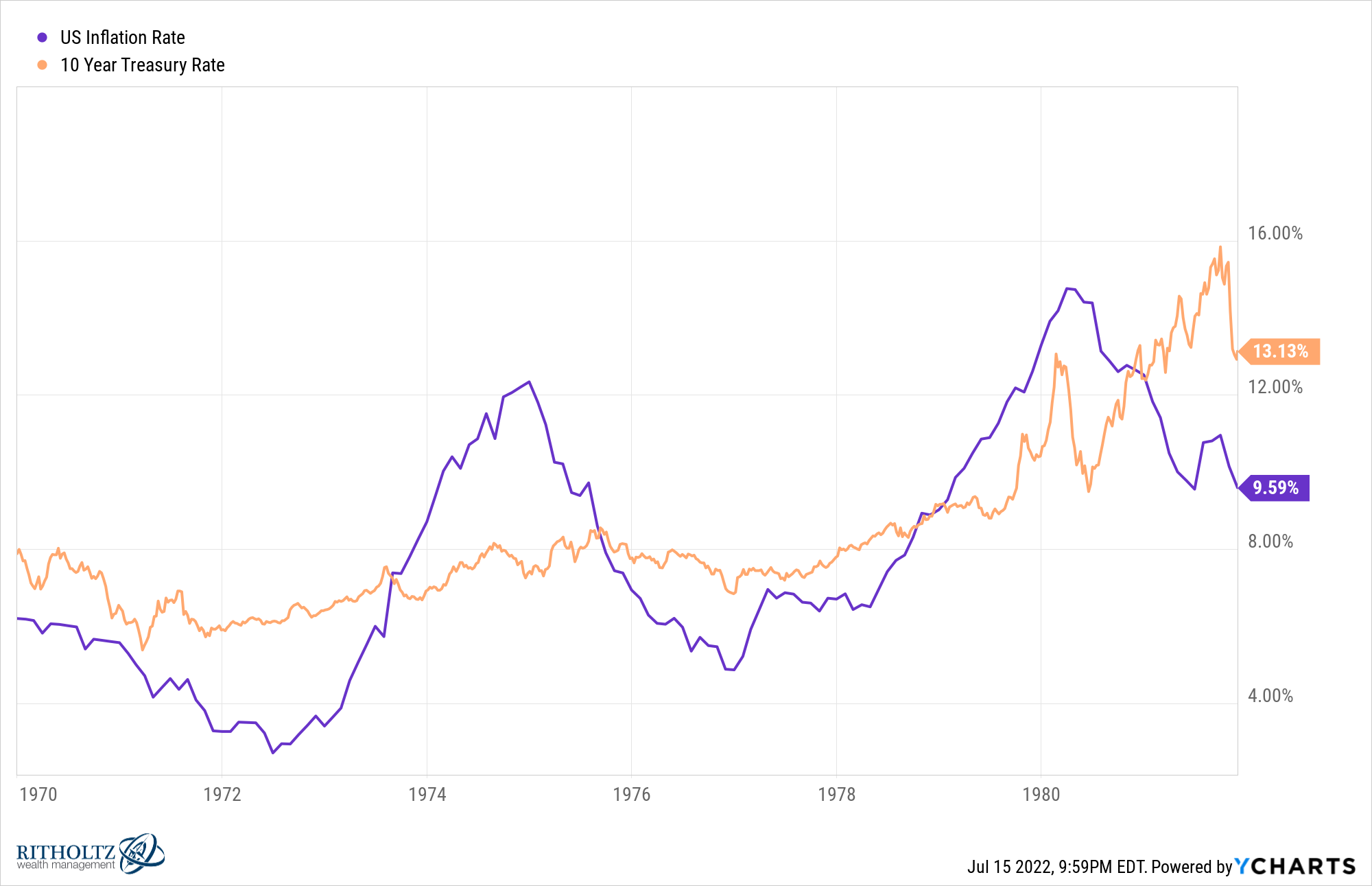 Although rates were falling at the time, 10 year treasury yields were still almost 4% higher than the inflation rate by the end of 1981.

And those interest rates were 10% higher than they are today.

Rates were higher across the board. 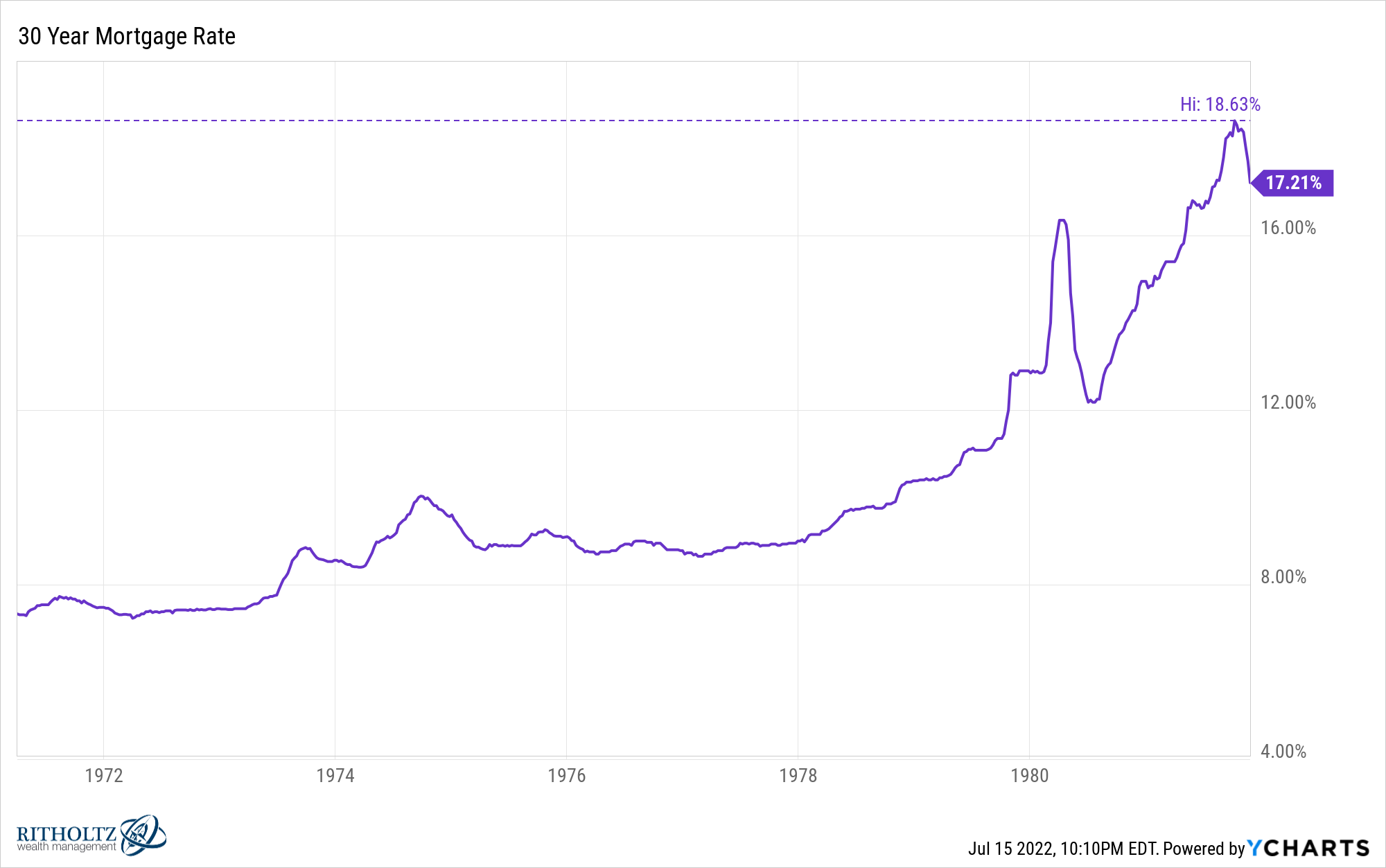 Housing prices were obviously much lower back then. The number I found for 1981 is around $70k for the average home price.

With a 20% down payment and a 17.2% fixed rate mortgage, that equates to a payment of a little more than $800 a month. Interest tends to be front-loaded no matter what rate you pay but that first payment on a mortgage using these terms would be less than $5 to principal and more than $800 to interest costs.1

See, things haven’t always been easy for the baby boomers.

Of course, the other side of insanely high borrowing rates were double-digit yields for fixed income investors: 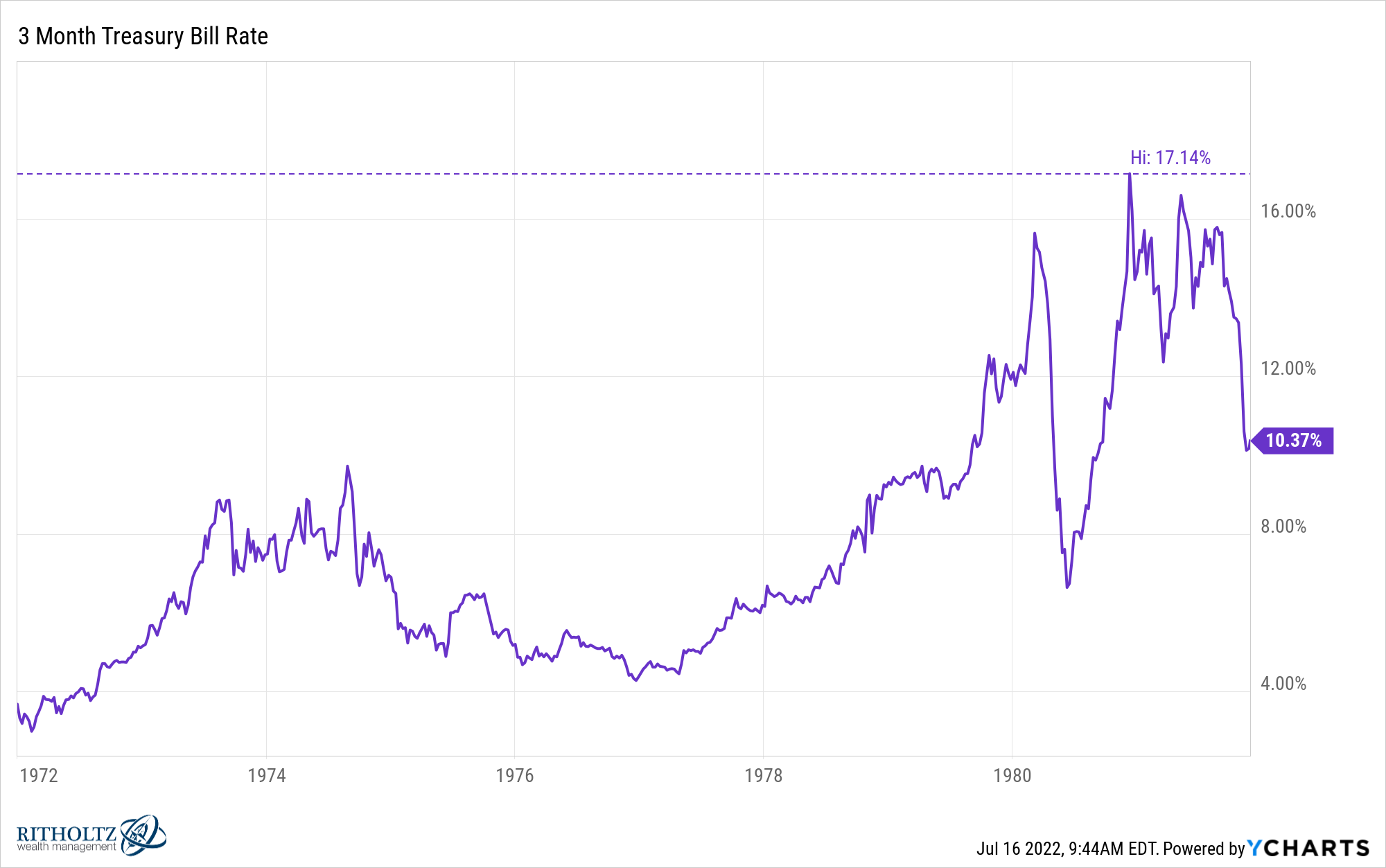 In late-1981 you could earn more than 10% on safe short-term government T-bills. Those rates struggled to keep up with inflation but it was much easier to find income than it is today.

It’s also important to remember how long inflation was elevated by the early-1980s. 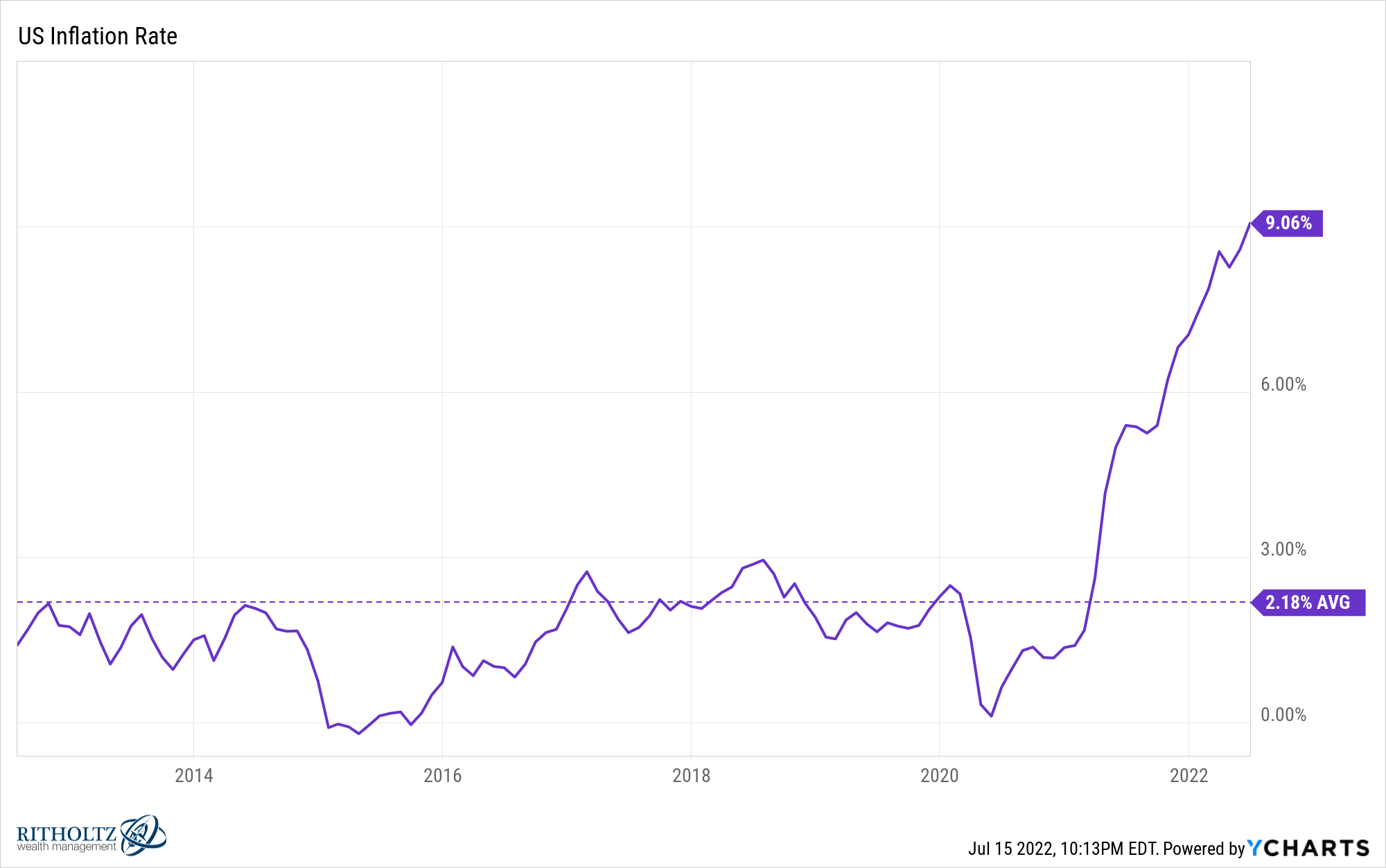 Leading up to the end of 1981 saw average inflation rates much higher: 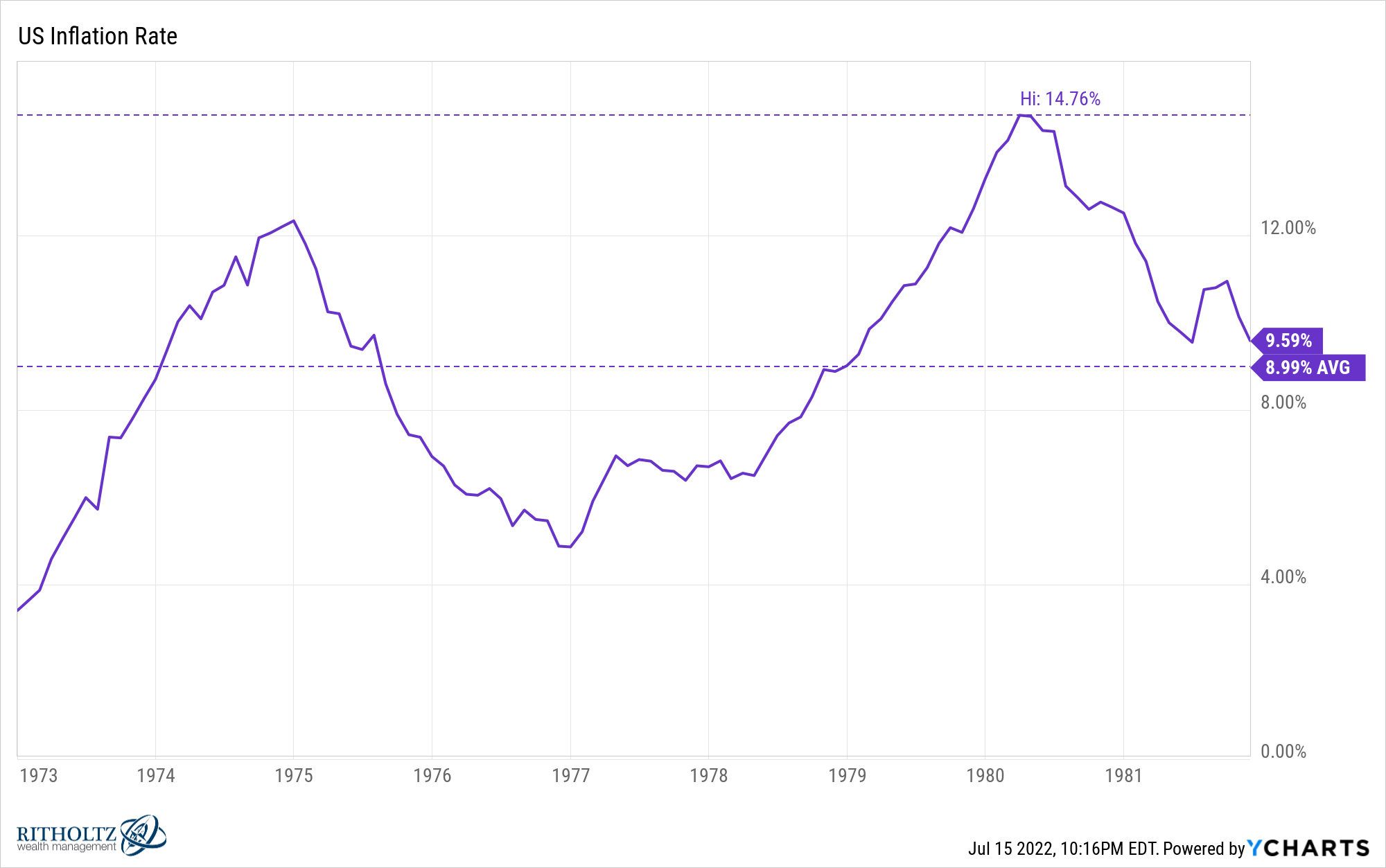 For 10 years, inflation averaged 9% per year, peaking at nearly 15%. The current 9.1% inflation rate feels unusually high, and it is based on the past 3-4 decades, but it’s only been around for a relatively short period of time when compared to the last time this happened.

I honestly don’t know how people would react to 10 years of 9% inflation, let alone 10 months of it.

With inflation and interest rates so high for so long, valuations on the stock market fell to single-digit levels by 1981: 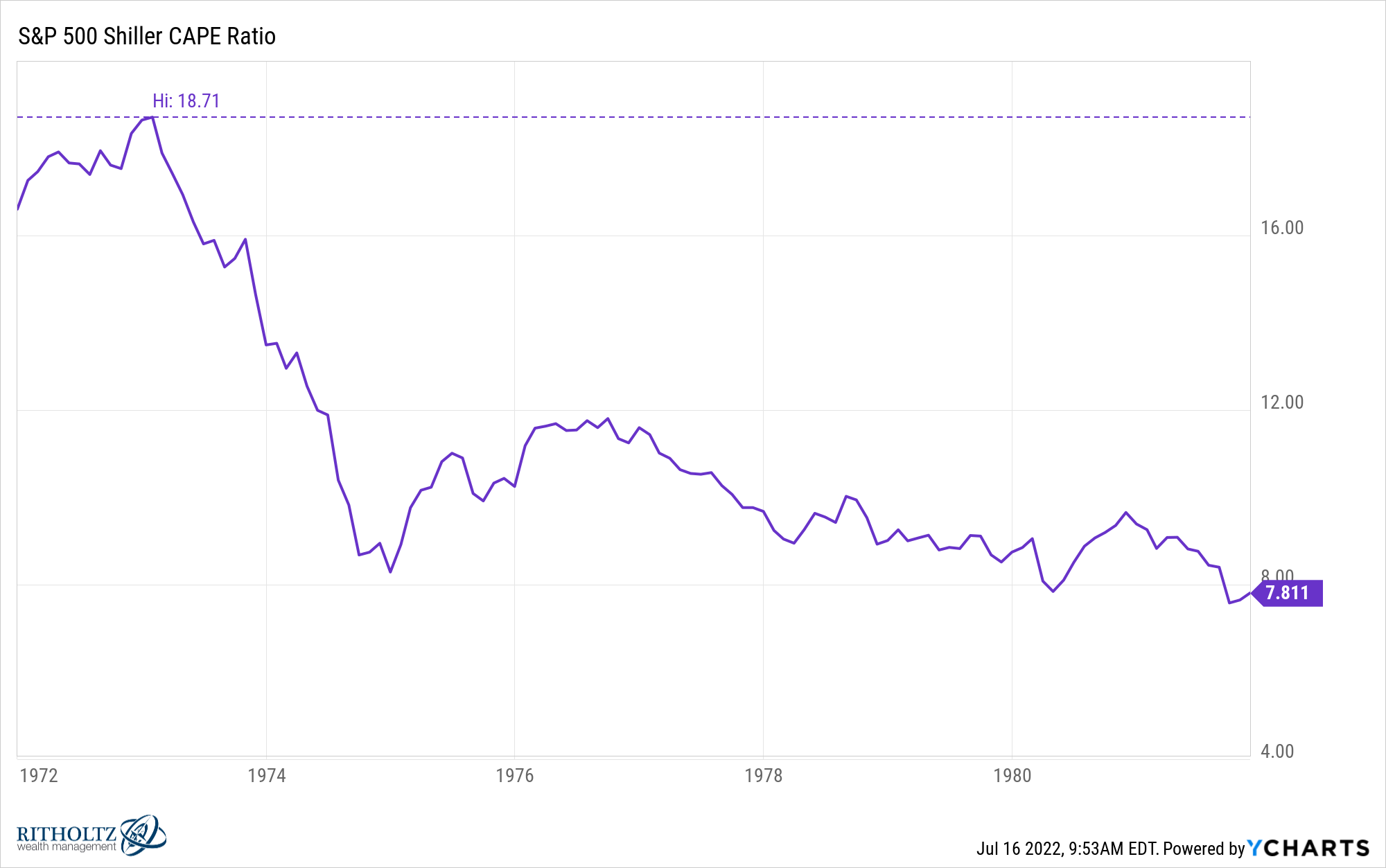 Valuations have come down this time too but are still high by historical standards: 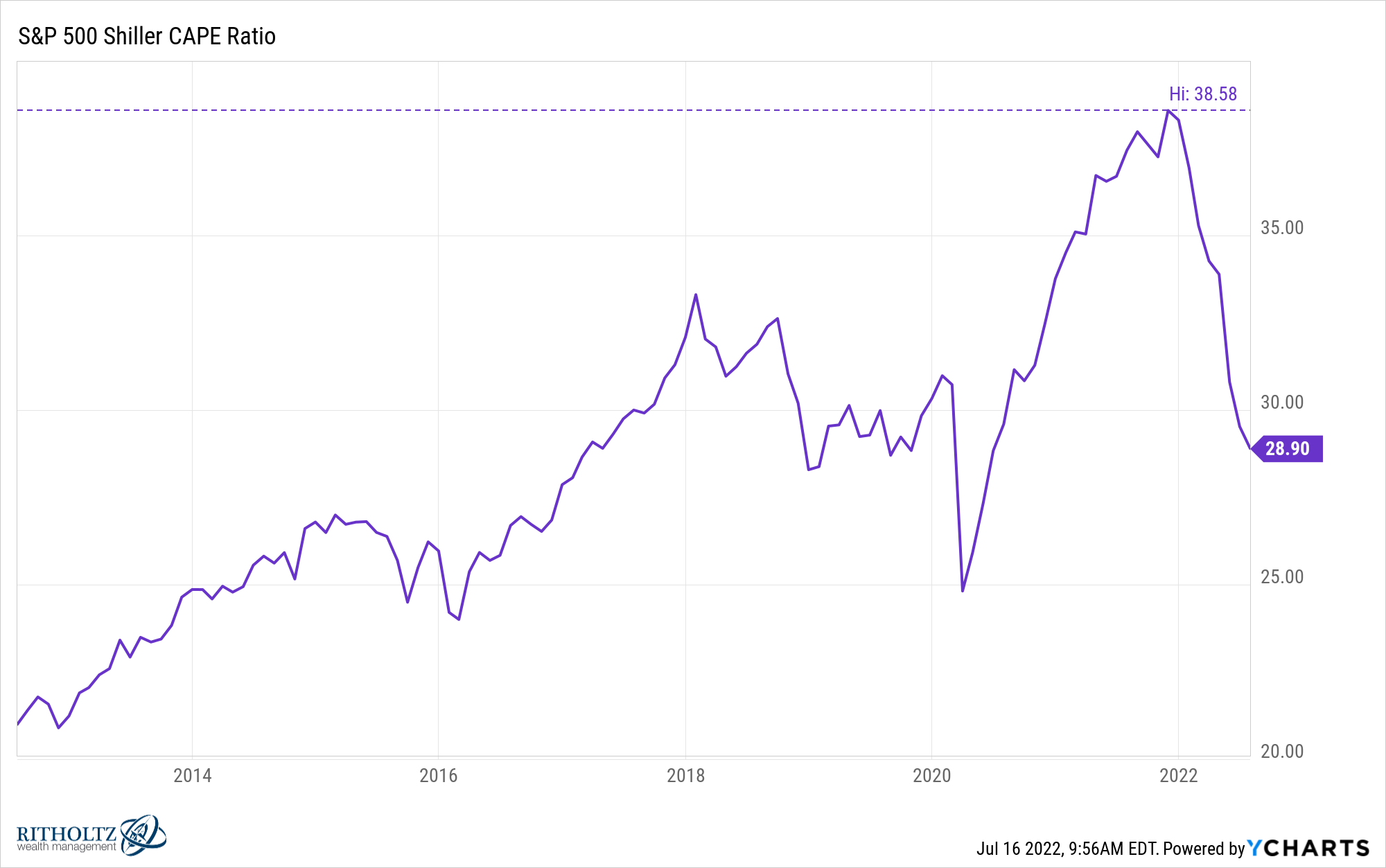 High inflation regimes tend to push down valuations so it makes sense we’re seeing a reset in multiples. The big question is how long it lasts and how low they go.

The last time inflation was this high it basically took two recessions in short order to slow the rapid rate of change in prices: 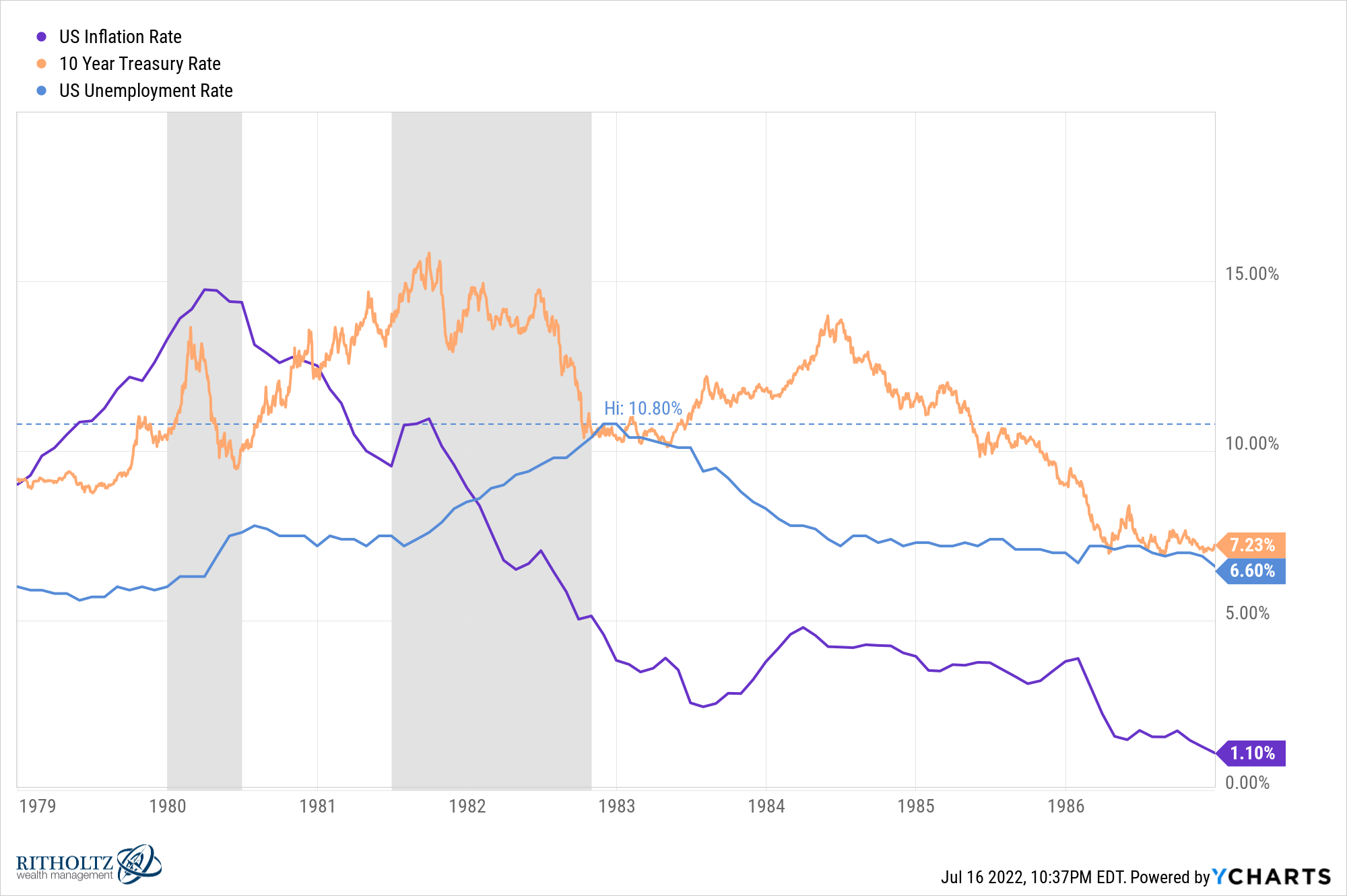 It would be nice if we could get over this inflationary environment without seeing a recession.

I don’t know if that’s possible but a financial blogger can dream.

Further Reading:
The Present & the Past of Inflation

1The good news is mortgage rates fell from there, hitting 9% by 1986 but no one knew that at the time.

While Berkshire Hathaway (NYSE:BRK.B) (NYSE:BRK.A) probably won’t win any awards for the most exciting enterprise, its shares represent a sensible option in a world of uncertainties. Featuring a...

As Canada's last frontier for mineral exploration, Nunavut is also one of the most promising. Covering an area roughly the size of Western Europe, the region is incredibly...

Why crypto remittance companies are flocking to Mexico

5 Ways the SECURE Act 2.0 Can Boost Your Retirement Savings