Senior Managing Editor’s Note: This week, we’re sending you some of the best content we’ve published since the beginning of the year. We hope you enjoy this special series. We’ll be back Monday, July 18, with brand-new research.

Before the Federal Reserve’s creation in 1913, bank runs in the U.S. occurred every five to seven years.

They happened so frequently that it was like the national pastime before we invented baseball.

In the 19th century, Americans would rush to the bank to retrieve their cash, fearing that the bank’s unpaid loans would render it insolvent.

As lines grew outside the bank, the bankers would sometimes stack cash up in the windows in an attempt to quell the panic and show depositors that their cash was safe.

Ironically, it was actually the run itself that would cause the bank to go under, driven by customers’ fear of its insolvency.

In other words, bank runs are a self-fulfilling prophecy.

In a fractional reserve banking system, the bank only reserves around 10% of its loans.

That means if everyone tries to obtain their cash simultaneously, there usually isn’t enough available to make depositors whole.

But as long as people have reason to believe their cash is safe, there won’t be a bank run.

We don’t have retail bank runs like the days of yore, primarily due to the Fed as a buyer of last resort and FDIC insurance.

However, we still have institutional bank runs, as we saw during the 2008 financial crisis when Lehman Brothers went under.

Banks are now required to hold more reserves, and that’s kept faith in the system.

On the contrary, crypto has no central bank.

It rejects the idea that there can be one central entity controlling the monetary supply.

This week, we saw the first “crypto bank run.”

TerraUSD (UST) is a stablecoin that aims to track the U.S. dollar.

Unlike a centralized stablecoin, UST doesn’t reserve the actual cash to hold UST to its peg.

The thinking behind this is that a stablecoin can’t be seized by a government because there’s no reserve held at a bank.

Subscribers of my Next Wave Crypto Fortunes service should be familiar with LUNA. We sold it for an 18,325% gain when it peaked in December.

When I advised selling LUNA, I was worried that what happened Monday was inevitable.

That’s because of the protocol’s mechanics, which have a fatal flaw.

In order to obtain UST, you have to mint it by buying LUNA at the market price.

The protocol then takes those LUNA coins and burns them.

This reduces the supply of LUNA and creates upward price pressure.

The reverse is also true.

To create LUNA, you have to convert UST. In doing so, the protocol burns the UST.

This creates an arbitrage opportunity.

When the price of UST is below $1, traders can buy it and sell it for $1 of LUNA. That reduces UST supply and, as the thinking goes, pushes prices back up.

But why hold UST rather than a centralized stablecoin?

Well, the answer is simple: LUNA’s Anchor Protocol was paying 20% for staking UST.

In that sense, you’re holding an asset that tracks the U.S. dollar, and receiving a rate that’s 20X higher than a money market account.

That’s why some 70% of the $20 billion of UST in circulation was staked in the Anchor Protocol.

When investors find a “risk-free” yield like that, why not borrow money and invest it?

And that’s exactly what crypto investors did. Other protocols were created to allow investors to leverage into this trade.

As we know from traditional finance, leveraging is dangerous. It makes stable things become unstable.

Leveraging is like building a tower with children’s blocks. The higher the tower goes, you don’t need as much force for the entire thing to topple over.

Even my 2-year-old understands that.

The latest volatility in crypto markets put the UST peg to the test.

The peg was briefly lost over the weekend. UST traded for $0.98 as holders tried to redeem hundreds of millions of dollars all at once.

Think of this like a modern-day bank run, where people rushed to get their money out of UST. In doing so, they created more LUNA.

As they created more LUNA, it caused the price to drop. Then people wanted to sell LUNA, which put more pressure on UST. 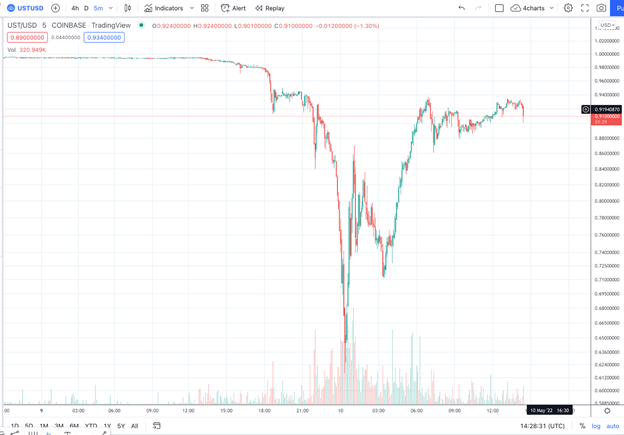 If something like this were to happen in the traditional finance world, there would be a central bank to backstop the losses.

In this case, Terra’s founder, Do Kwon, has committed $10 billion of bitcoin to provide a backstop in case of a sharp fall in UST (which is what we’re seeing now).

He’s like the banker stacking piles of cash in the window to calm depositors’ fears.

In doing so, bitcoin is like a reserve currency for the UST in the same way that central banks hold large quantities of dollars and other currencies in their reserves.

And I’m hearing rumors that the sell-off was precipitated by a large traditional finance hedge fund looking to crash the entire protocol.

What we’ve seen in crypto over the years is that what doesn’t kill it makes it stronger.

4 Ways to Manage the Tone of Your Email