Why the Financial Goalposts Are Always Moving

In that time, the Chinese economy has grown by nearly 10% per year. GDP per capita and household consumption each grew fourfold between 1990 and 2005.

Researchers wanted to see if the economic progress in China was accompanied by a similar increase in life satisfaction. Becoming a richer country did not make people any happier:

Yet during the same period, life satisfaction levels in China demonstrated very different trends—in particular dropping precipitously in the initial stages of rapid growth and then recovering somewhat thereafter. The drops in life satisfaction were accompanied by increases in the suicide rate and in incidence of mental illness.

Why is this the case?

More wealth brings about inequality and insecurity as different skill sets are rewarded in a faster-paced economy. When more wealth is created, it becomes easier to make relative comparisons to those around you.

The New York Times interviewed dozens of millennials from around the country to help better understand their fears and anxieties about money.

One person talked about what happens when you start making more money:

Moving the financial goalposts is an odd paradox of the human experience.

On the one hand, it’s a good thing we’re so driven to improve our place in life. The drive to get better is what fuels innovation, growth and progress.

But those same attributes can also drive you mad if you never feel satisfied with your accomplishments or blessings.

For some people success only amplifies their worries:

2020 was when I really saw a shift in how much I was making. It was the first year I made over six figures in design projects. And I felt weird and guilty about it. Like, do I need to give it away? Do I need to tell my parents how much I’m making? In Nigerian culture, you give your parents the first money you ever make. I gave my parents my first paycheck when I was a graphic designer at a church.

I’m actually going to counseling about this. My counselor helped me realize that there’s never going to be a number that will make me feel secure. If I make a million dollars this year, I’m still going to be stressed about next year.

This phenomenon exists for a number of different reasons but the simplest explanation is the fact that we’re all just human.

Dopamine makes up a minuscule number of the billions of neurons we have firing in our brains but it can have an overwhelming influence on the decisions we make based on risk and reward.

Research into this subject shows expectations are often more important than the reward itself.

Getting exactly what you planned for doesn’t produce a dopamine hit in your brain. This is why it’s often so unfulfilling to reach the exact goals you set for yourself.

Let’s say your goal is to become a millionaire someday.

The journey of saving, investing and planning to hit seven figures in wealth is going to be much more satisfying than finally seeing those two commas in your bottom line.

This is why addicts continue to increase the amount of drugs or alcohol consumed over time. They need a bigger fix to get the same reaction from their vice of choice.

Our brains receive more stimulation from unexpected events than expected ones. But even those novel events experience diminishing returns over time.

No matter what strategy you choose when investing, risk never completely goes away. It just changes shape.

The same is true when it comes to wealth. More money doesn’t necessarily solve all of your problems. It simply creates new ones.1

More money certainly makes your life more comfortable. It takes away many of the daily stresses that come from budgetary concerns and unexpected expenses.

But I know and have worked with enough uber-rich people over the years to know that more money alone doesn’t automatically make you happier.

Yes, I’m successful but why don’t I have as much money as that person?! I’m so much smarter than they are.

Sure I’m wealthy but just think how much more peace of mind I would have if I doubled my current net worth. That would make everything better.

I’ve been thinking a lot about this lately as I slowly move into middle age. A mid-life crisis is based not so much on your station in life but on where you are relative to where you expected to be.

This is why many researchers claim the relationship between happiness and age form the shape of a smile: 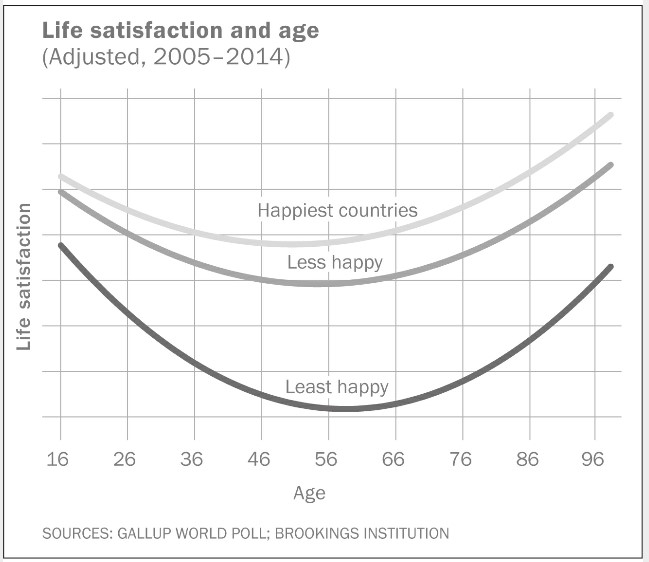 Life would be a lot easier if you could simply follow top 10 list of things you need to do to be happier in life. Unfortunately, there is no secret.

The goal-setting process requires you to set some expectations for the future. I’ve found it useful always to try my best but keep my expectations extremely low. That way if something doesn’t work out, the failure doesn’t act as a setback. And if it does work out, it’s icing on the cake.

It’s also helpful to avoid comparisons with people who are more successful than you at all costs. Downward comparisons are always better for your mental health than upward goalposts.

The ability to focus on other people is also a great way to get out of your own head. This is one of the most significant unexpected benefits of having kids. Once they came along I cared a lot less about my own hang-ups.

Obviously, all of this is easier said than done.

As with most things in life, there’s a trade-off between contentment and self-improvement. Some diversification between the two is a good compromise.

1No offense to Christopher Wallace and Sean Combs but I don’t subscribe to the idea that more money brings about more problems. It’s just a new set of worries.

Pensioner private data is being sold on Facebook for pennies

Musk Gets a Potential Boost With Twitter Whistle-Blower’s Claims